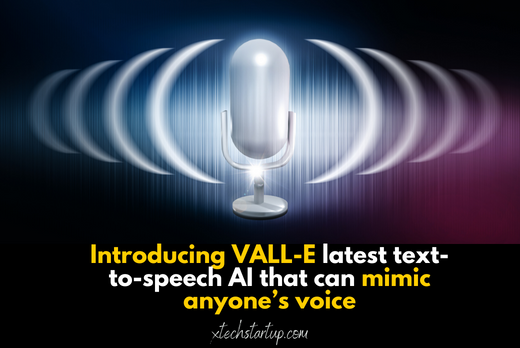 AI has made remarkable progress in various areas lately, such as creating images, artwork, and videos by using text prompts. Introducing VALL-E, the latest text-to-speech AI that can mimic anyone’s voice.

The latest tool in this field is VALL-E, developed by OpenAI, which follows in the footsteps of ChatGPT and DALL-E. VALL-E is capable of replicating any voice with stunning accuracy, making it a valuable tool for various industries such as entertainment, education, and customer service.

The developers of VALL-E, a new text-to-speech tool, have shown how it works by giving a demo. They played a few short recordings and showed how the tool can perfectly copy the voice in the recording.

The demo also allows you to compare the results of VALL-E’s output with the “ground truth” – the original recording of the speaker – and the output from traditional text-to-speech technology for a better understanding of VALL-E’s capabilities.

Microsoft is known for its significant investments in AI and is one of the supporters of OpenAI, the organization behind ChatGPT and DALL-E, a text-to-image or art tool. In 2019, Microsoft invested $1 billion in OpenAI, and recent reports suggest that they are considering investing another $10 billion in the company.

Overall, VALL-E is a significant advancement in AI technology, and its ability to mimic a person’s voice is sure to have a significant impact on various industries.